Artis Raitums from the Team Latvia: “WFC is much more than just floorball”

The floorball World Championships will be played in Helsinki in December, and the preparations for the tournament have already begun. In our interview series #roadtowfhelsinki, we are going to present top players from participating National teams. Next up is team Latvia captain goalie Artis Raitums.

Artis Raitums, 33, a forward, has played for team Latvia men’s team since 2006. He is a real WFC veteran since the upcoming tournament will be his 8th in a row. In Latvia Artis, plays for FK Talsi, and he has previously played in the tournament home country Finland for four years, which makes Helsinki a familiar environment for him. As a player, he describes his strengths as a player in his experience and physical condition which, is vital for team Latvia’s tenacious playing style.

How are the preparations going? What is the goal for team Latvia in the tournament? How does it feel to be back in Finland to play?

How are you, and how has your summer been?

– Until midsummer, I was very busy with the team and we finished the season in 2nd place. After the long season, I went traveling through Latvia for a week with my family.

– Yes, can’t wait for the WC and I’m sure the championship will be greatly organized.

How is team Latvia preparing for the tournament?

– We will have our first camp in the middle of July and then every month, we will have either a camp or games until December. Hope the plan will go smoothly and there will not be any issues.

What is team Latvia’s goal in the Championship? 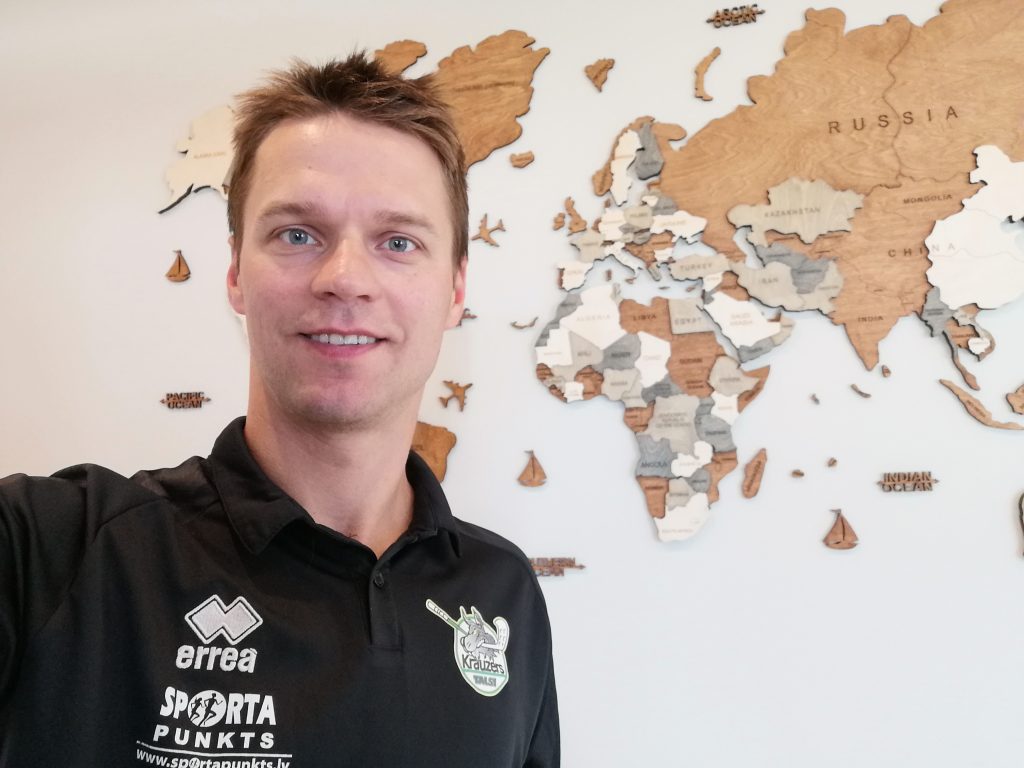 The Championships have been moved one because of the unfortunate situation in the World, how do you see this affecting you as an Athlete?

– Personally, it doesn’t affect me so much because I’m getting younger all the time.

What kind of changes has Covid-19 brought for the preparations? Good or bad?

– At the time when Covid-19 started, we didn’t have any camps or anything with the National Team. So it’s hard to find anything good or bad. But I hope that all the athletes can find out the best options, how to practice, and how to prepare for WC.

How is floorball present in your everyday life?

– It’s kind of all my life I’m working in Talsi Sports school as floorball coach and taking care of Men’s team in Talsi.

What is your role in the team?

– I’m the captain of team Latvia.

You have a lot of experience from international games, what has been the most learning experience so far?

– Every WC is different, every situation is different…. and always you must be prepared for new challenges.

You have represented your country since 2006, if you think about yourself back then, what kind of player were you at the beginning of your career?

– I would love to say from 2003. But at the start, I was young and shy for the National team. I didn’t think so much about floorball, just go and play.

– Nowadays, it is different. There are much better preparations for WC, and thoughts about floorball have changed. Also, I understand that there is more than floorball in WFC It is always interesting to see how the host city has prepared for this big event in floorball.

What have been the most significant moments during your impressive career?

– It is always nice to remember good games and big wins. But when I moved to Finland I started to think about floorball more professionally. I started to watch games and it woke my interest in players, teams, tactics, and ways how to play. After that, I was fully invested in this great game.

What has been the most memorable or amazing World Championship moment?

And the funniest blunder or moment?

– It’s hard to remember all of them, but one moment comes especially to my mind. It was a moment when we played table tennis in the hotel (2016), and one of the players got hit by a racket, and he got a wound to his eye. After that accident, we were not allowed to play table tennis anymore.

In 2012-2017 you played in the host country Finland, Do you think it gives you an advantage for the upcoming tournament?

– Yes, it will be easier to go to the tournament. Anyway, it gives a great feeling to be there. Sure I will meet my old friends, remember old times and some jokes… oh, can’t wait.

Do you have any superstitions or traditions in your preparations to find your best form for the tournament?

– There must be good preparations in the summer and very important to get to good shape before next season. But the most important part is to enjoy every moment in practice, every game, and get out the most positive things that you could get. Enjoy.

Could you describe the intensive tournament with your team, what is the best part of it?

– The best feeling is when you are like a professional. Your daily routine is like a pro. You only have to think about playing and recovery.

And, what do you miss the most during the competition trip?

– Jokes with the teammates are the best part of all trips.

Lastly, could you send greetings for the WFC fans around the world from team Latvia?

– Just watch our fighting spirit in every game, our willingness to win in every situation and at the same time, we are more positive than any other team. Cheer for Latvia.