The floorball World championships will be played in Helsinki in December, and the preparations for the tournament have already begun. In our interview series #roadtowfchelsinki, we are going to present top players from several different teams. Next up with team Singapore’s R Suria.

R Suria, 28, plays as a forward for team Singapore, the upcoming tournament will be his third WFC in a row. Previously, he has won AOFC gold medals and the Sea games. In Singapore, Suria represents Black Wondersticks in his home country. As a player, he describes himself as versatile, adaptable, and disciplined which are crucial skills for a team captain. Suria looks forward to the WFC where we will see a well-prepared team Singapore on the court. Next up for R Suria.

How are you?
– I am doing very well and I am excited for the World Championships.

How is team Singapore preparing for the tournament?
– Team Singapore has been training regularly and firming up our play-ups and tactics as a team.

What is team Singapore’s goal in the Championship?
– Our primary goal is to get Top 12 and our secondary goal is to be the best Non-European team and qualify for The World Games.

The Championships have been moved once because of the unfortunate situation in the World. How do you see this affecting you as an Athlete?
– As an athlete, I should train hard and be well prepared for the Championships, however at the same time, I should not be complacent about the situation and take the necessary precautions to take care of my health as well.

What kind of changes has Covid-19 brought for the preparations? Good or bad?
– The good thing is that we get to train normally instead of training in small groups, however, we have to take weekly Covid-19 test and can only train if we have a negative result.

How is floorball present in your everyday life?
– I always go to my room at the end of the day and take my stick and just practice my basic skills. This is on top of the daily physical or court training we have.

What is your role in the team?
– I am the Captain. 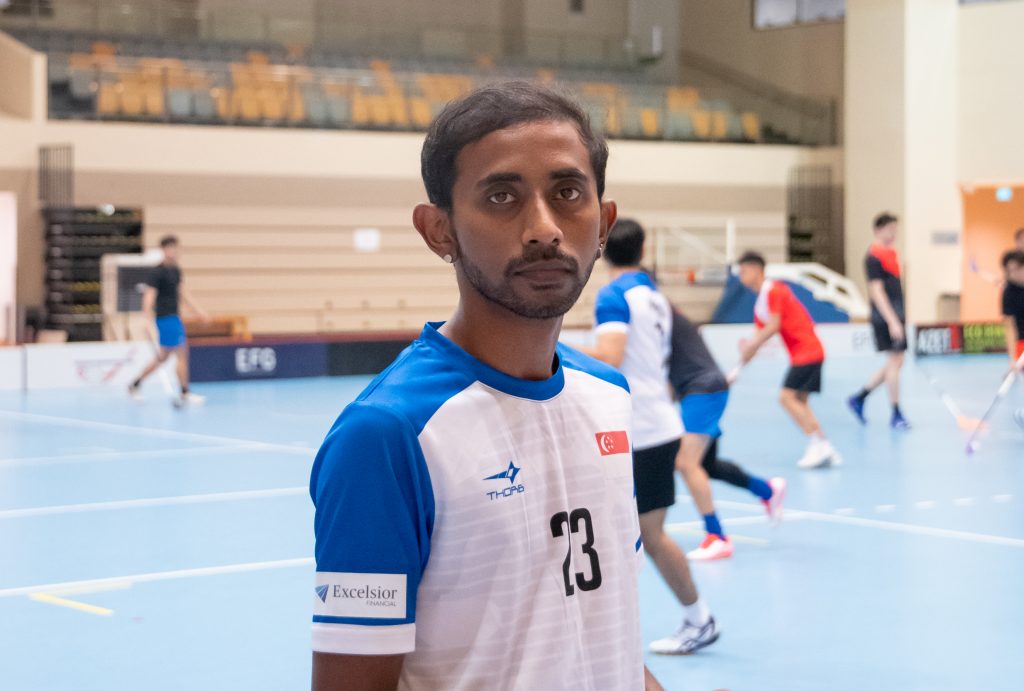 And what kind of responsibility does that bring to you?
– I have to lead the team on and off the court. With the help of my Vice-Captains, I help to motivate the team to do their best in every training and be a listening ear for them off the court.

Tell us a little bit about how your career started and when did you start?
– I started my career in December 2020 as a Mechanical Engineer/Maintenance Supervisor. I graduated in 2016 and focused on Floorball while doing part-time jobs.

When did you start to play floorball?
– I started floorball in 2005.

How did you end up playing floorball?
– I went to the Co-Curricular Activities (CCA) fair in my school and they were showcasing floorball. I found it interesting and ended up playing it till now.

What is the beauty of the game, why did you start to play floorball?
– I enjoy the fast pace of the game and the different tactics and skills that can be used to improve a person’s game. I used to play golf before and I was not interested as it was not challenging enough for me.

What is the state of floorball in Singapore, how popular is it?
– Singapore floorball has been gaining popularity since 2015 after we won the SEA Games. With the increase in the number of people playing, we have a wide talent pool to choose from and develop them for the future.

Could you tell us your favorite floorball memory?
– My favorite memory would be being chosen as the best player against the USA in the 2016 World Championships.

And, funniest moment or blunder?
_ A blunder would be getting a 5-mins penalty against Canada in 2018 and letting them score 2 goals to draw the game.

What kind of team is team Singapore?
– Singapore is a team with young individuals who are motivated to give their best in the sport. They are mentally strong and always up for a good fight.

What are the strengths?
– Supportive, Diverse range of skills, Strong competition amongst teammates.

And, what do you miss the most during the competition trip?
– I miss the atmosphere when playing amid a huge audience.