The floorball World championships will be played in Helsinki in December. In our interview series #roadtowfchelsinki, we are going to present top players from several different teams. Next up with team Slovaki’s Michal Pazal.

Michal Pazal, 24, is a young captain leading Slovakia into his second WFC tournament in Helsinki. Michal describes his team as young, ambitious, and skillful, promising to create a great party, which we are excited to see. At the club level he plays for Acmea Sparta Prague in the Czech Republic, achieving a third-place finish. As his strengths, Michal sees his anticipation of situations and hard work. Team Slovakia is looking to prove to the floorball world that it belongs among the top 5 nations.

How are you, and how have you been lately?
– From the very beginning of my life, I feel great, I am happy and excited that the World Cup is finally taking place

In December the World Championships will be played in Helsinki. How much are you waiting for the upcoming WFC-tournament?
– We are waiting a year longer than we should. Anyway, I firmly believe that the waiting period is over and in December teams will be able to make a huge floorball show.

Why did you deserve a spot on the team and how do you personally prepare for the upcoming event?
– I probably deserve the spot in the team with my hard work and devotion to floorball. It is an honor to represent my own country with a captain’s armband, but it should be noted that it is about our whole team and especially about my teammates with whom we form a strong party. I, personally, have been preparing continuously since last season, throughout the summer to be the best prepared and valid player for my team for the upcoming WFC. 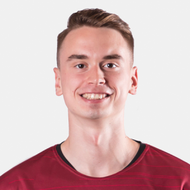 How is team Slovakia preparing for the tournament?
– Our team was preparing in Slovak national events, especially on the tactical side, where we trained various game stations from which our team could benefit, all under the guidance of our great coach R. Mrázek. Of course, we also managed a few little team-buildings which, I think, can be very helpful. Otherwise, the players prepared physically in their clubs or individually.

What is the goal of team Slovakia?
– The main goal of the team Slovakia is 5th place and to show to the floorball world, where we in my opinion actually belong.

What kind of a team does Slovakia have? Could you tell us about team Slovakia?
– Slovakia has a relatively young, ambitious and skillful team composed mainly of legionnaires or players who have tried foreign leagues and clubs. Even though the players are scattered around the world, together we create one great party, which is ready to fight for the highest possible position.

How long have you played floorball and how did it start?
– I have been playing floorball since I was 7 years old. It started when my friend from my class called me to the first floorball training, which took place in a small multifunctional facility in Košice in the Ťahanovce housing estate, which consisted of a gym, 2 squash courts, and one double squash court, where our training actually took place.

What factors make floorball significant to you?
– Some factors are that it is an extremely fast developing and dynamic sport, which can be tough. I always enjoy it the most when I look at the game of the Sweden-Finland, which is the floorball showcase as top athletes with a lot of skill on the stick. This is when people understand what floorball is all about.

What is your personal goal in floorball?
– My goal is to place behind the top4 at the WFC, or even surprise, to win the Czech league superfinal and play in the highest Swedish or Finnish competition (or become a stable member of a team abroad, such as Matej Jendrišák).

Tell some very memorable moments in the floorball field?
– It will be my first junior WFC in Sweden in 2015, that set my floorball mindset and motivated me to become a better player.

Lastly, could you send greetings for the WFC fans around the world from team Slovakia?
– Hi everyone, I hope you come to have fun on many floorball matches with us and help us to create a great atmosphere. We are looking forward to seeing you!