The floorball World championships will be played in Helsinki in December. In our interview series #roadtowfchelsinki, we are going to present top players from several different teams. Next up with team Czech Republic Lukas Bauer.

Lukas Bauer, 30, is preparing for his 3rd WFC with the Czech Republic. Lukas plays for Florbal Mladá Boleslav in Czech as a goalkeeper, where he has managed to win the Czech championship three times and three goalie of the season awards. Lukas describes himself as a big goalie with good team player abilities. Team Czechia is coming hungry to the tournament to play some offensive floorball and some disciplined defense, bringing success for the team.

How are you, and how have you been lately?
– Kiitos, I am okay and enjoy these days before WFC. In the last few days, we had many games so there is no time around. 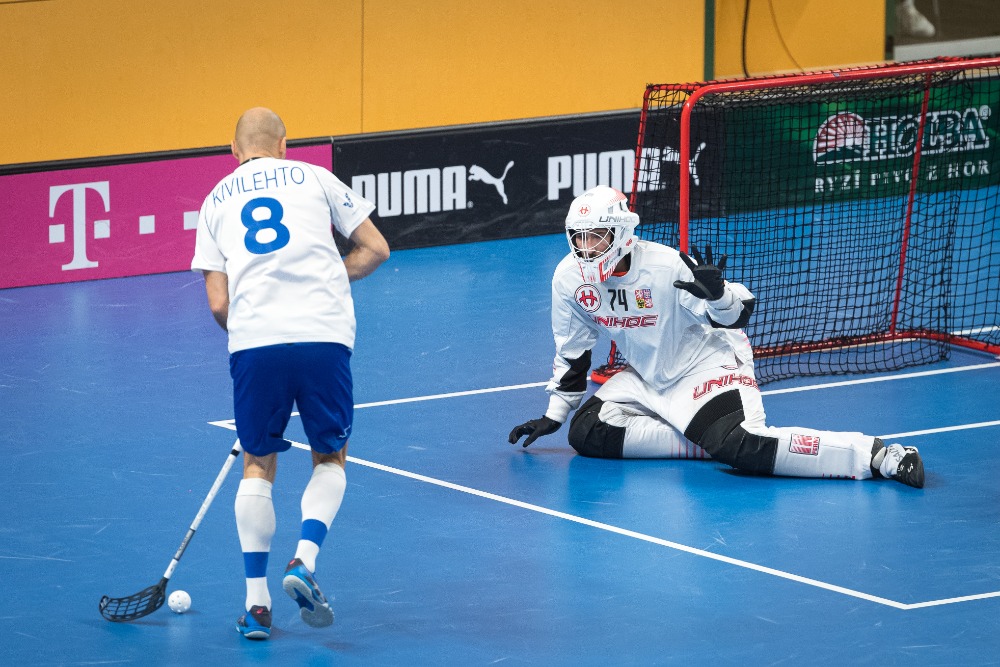 Couple more weeks to the tournament – Have long and how much you have waited for the WFC tournament?
– It’s a really long time and waiting especially after delaying due to covid. Fortunately, I have always much to do – training, games, work – every minute in my day is about floorball. Thanks to these things, I have a good notion about time to WFC, and now it’s going fast.

The Championships have been moved by a year because of the unfortunate situation in the world. How do you see this affecting you as an athlete?
– It’s unfortunate as you said. We prepared for the top tournament two years, and it has been moved just a few weeks before. But, I also think that it was a good time for our team. We had a couple of months to improve our skills, our team spirit, to know better each other. In general, I am satisfied and now it’s time to fight.

How has team Czech Republic prepared for the tournament?
– I think we made huge progress last year. We found some identity of the team, that’s important. The situation was problematic cause we couldn’t measure and play against Sweden or Finland, but at least on EFT we tried some things, and that’s why I am happy. Now we’ll have training camp and still a lot of work before us to be successful on WFC.

What are the last weeks’ preparations?
– Last weeks were quite hectic. Due to WFC, we played many matches in Czech Superleague and there is no time to think about the national team. Of course, we have it in our heads, but we need to concentrate on our club’s responsibilities. I try to use my free days for another fitness training (gym or running), but the real preparation starts next Saturday. Personally, I hope that comes fast, cause we are all looking forward.

What is team Czech Republic’s goal in the Championship?
– We are a young and hungry team which doesn’t afraid of our opponents. We want to play good floorball, be dangerous in offense and hard in defense. After all, we will see what happens in Helsinki. In the first match, we will play against Germany and then we will see.

U19 men won the World’s Championships last autumn in front of the home audience in Brno, Czech – how do you feel about that?
– It’s a great success, and I am very pleased about that. There were much effort and self-confidence from the Czech side. Czech U19 won the championship two times in a row something important is that it was different. The first time it was about defense, blocks, and counter-attacks. This August, guys played more confidently. They were better with the ball and dominated in their matches. It’s great we can use these players and their experiences in the men’s team. They can bring the winning mentality, which is important.

How and where did you start playing floorball?
– I started playing floorball more than 20 years ago in one of Prague’s teams called HC Coyotes. These days the club’s name is Vinohrady, and they play in Czech Superleague. I started playing at the beginning of the 2000s, and my first practice was in a small gym, of course as a goalie. 😊 I combined two sports – floorball and table tennis, but I decided to play floorball because of team spirit and sharing joy or sadness with other friends.

How is floorball presented in your everyday life?
– Floorball is completely my life. I am working as an official in Czech floorball, so I am thinking about floorball 24/7. My responsibility is leading one of the regions, specifically, Prague and Central Bohemia. After all, it’s a relief to come home in the evening, after working a day and training. It is relaxing to watch some movies with my girlfriend. We may be talking and enjoying something different. 😊

What is your player number and what is the story behind it?
– Last few years in Mladá Boleslav I wore number 74 and that’s the same as in the Czech national team. And why 74? That’s simple – I was born 7th of April.

Do you have any game-day routines? What are the routines?
– I have nothing special, just try to do my things the same every time. Important is good breakfast like I told you before. After that I relax and watch some series or read a book – that’s better for my eyes. Of course, I watch and study our opponents to know how they shoot or move in the offensive zone.

How about the game day song?
– I had some when I was younger. I really liked the Czech song Touha from Daniel Landa, Castle of Glass from Linkin Park, or Faded from Alan Walker. Last season I listen to my playlist and that’s a mix of everything.

Lastly, could you send greetings for the WFC fans around the world from team Czech Republic?
– It’s my pleasure to invite, and meet you in Helsinki. After postponement and covid time, world-class floorball is here again. Come to the arena and enjoy games and the atmosphere. I can promise that the Czech national team will be fighting like a lion which is one of our symbols. We will be honored to play for you all. See you in Hartwall Arena!