The floorball World championships will be played in Helsinki in December. In our interview series #roadtowfchelsinki, we are going to present top players from several different teams. Next up with team Germany’s Tim Böttcher.

Tim Böttcher, 30, captain of team Germany, is preparing for his 6th WFC tournament and second as captain. Tim is an experienced player with an impressive CV, having won the German championship 11 times by the age of 30. At the club level, he represents UHC Sparkasse Weißenfels e.V., identifying his strengths in his leadership and sports attitude abilities. Tim is looking to lead his hard-working and motivated team for a top 5 finish in the tournament. Next up with team Germany’s Tim Böttcher. 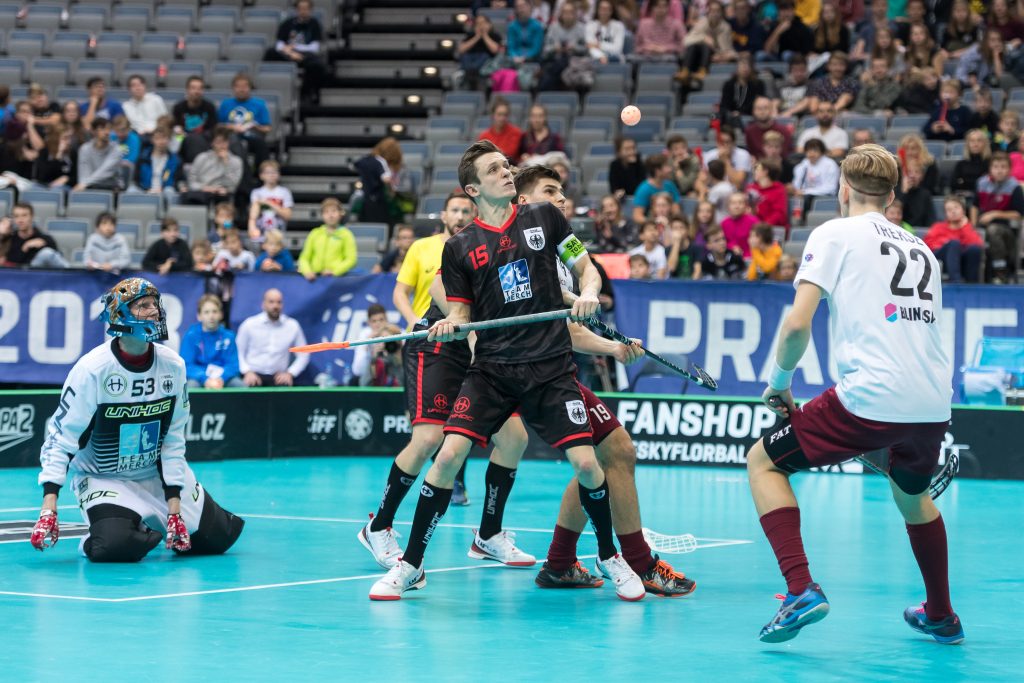 How are you, and how have you been lately?
– At the moment I’m very good, thank you for asking. The last weeks have been a little bit stressful, but now my batteries are almost completely recharged.

In December the World Championships will be played in Helsinki. How much are you waiting for the upcoming WFC tournament?
– I’m very excited about this tournament! There have been so many matches and events that had to be canceled in the last months and especially in 2020, so it is amazing to play again on the “big stage”.

Why did you deserve a spot on the team and how do you personally prepare for the upcoming event?
– In the last months, I was doing a lot of sports to bring myself in the best possible shape. I took even more care about my lifestyle e.g. my sleeping rhythm and eating as well. World Championships are always something very special and so I prepared myself in a certain way for a long time.

It will be my second WFC in which I will lead our team as a captain. This role was chosen by my teammates, which makes me proud. Also, I already played in some of those tournaments and so I think that I could help the team with my experiences.

How is team Germany preparing for the tournament?
– The preparation was not easy because of the corona situation in Germany, especially in the last winter and spring. But since April, we have had many camps together to go to Helsinki in the best possible way. Our final camp will be in Eerikkilä right before the start of the WFC.

What is the goal of the team Germany?
– Definitely, we want to reach at least 5th place. Of course, there are a couple of teams who are aiming for this and it will be a hard way. But we are working hard to get there and so to beat our opponents in those decisive matches.

What kind of a team does Germany have? Could you tell us about team Germany?
– I think we have a good mix in our team. There are experienced players with a lot of international matches as adults. On the other hand, we have young guys in our team who bring new energy to the whole group. Some of those guys, for example, won the U19 B-group at the WFC 2019 in Halifax. Most of our players are playing in the German Bundesliga. But a couple is a part of teams in the Swiss highlights league or is playing in Sweden. Our coaching staff is well mixed as well. All in all, there is a good mix between “traditional” structures and new impacts. But all of us connect aiming, success and working for this.

The Championships have been moved by a year because of the unfortunate situation in the world. How do you see this affecting you as an athlete?
-First, I’m really happy that this event was postponed and not canceled! That the WFC wasn’t played in 2020 was totally understandable in my opinion because there were much more important things to handle than a postponed world championship. I don’t think that the postponing affects me so much. But for us as a team, it was maybe difficult. After the qualification tournament at the beginning of 2020, we had our next international matches in this year’s October. So there was just a short time to find ourselves as a team and for our coaches to prepare us as could as possible for the tournament. The last camps we had together showed me that we are on the right track!

How long have you played floorball and how did it start?
– I’ve been playing floorball since the 2nd grade in school, so for about 22 years it started in a school course. My grandmother was a teacher in a primary school in which floorball was presented. She was taking me to the course and was asking the coach for a tryout. And since this moment I was “caught “ by this sport.

You have represented team Germany since the year 2008 and before that in the U19 Men’s team. What does it mean to you to represent your country?
– It makes me very proud to play for team Germany. When I first heard the national anthem as a player, I was very nervous. It was so special. With the times it changed a little bit and I can enjoy those moments even more. Especially at WFC, it is always something very honorable to represent our country. And because of this, I want to be a role model on- and offside the field.

What is your most memorable Championship moment?
– Actually, the two moments are quite equal in this sense. The first one was the Finnish national anthem in the final of the WFC 2010 in Helsinki. As said, this was my first WFC, but when the national anthem was sung It was fascinating because almost the whole arena was singing!

And your funniest blunder or moment?
– That’s hard to answer. I think a funny moment (at least for others) could be an interview I had to give in the first-period break of the opening match against the Czech Republic 2018. Right when the siren was ringing someone came to me and I had to go on a stage and do a live interview for the Czech television. Because I was so surprised I most probably just stammered something in bad English. To be honest I never watched this interview!

Fun fact of you?
– I guess I can be quite boring besides the field. On the other hand, often I switch to another mood when the final match preparation starts. Just like a calmer form of the hulk maybe 😉

Lastly, could you send greetings for the WFC fans around the world from team Germany?
– I hope that every one of the worldwide Floorball-family will enjoy this big event and support all the teams in the best way. Team Germany is happy and proud to be part of this year’s WFC. Let’s all make the WFC in Helsinki a great moment of sport!